Virtual private networks (VPNs) are a common solution for securing connectivity between remote workers or sites and the main enterprise network. VPNs provide point-to-point secure connectivity by encrypting all traffic between a VPN client and an endpoint on the target network.

However, as the demand for this secure connectivity grows, as telework becomes more popular and accepted, the fact that they do not scale well becomes increasingly apparent. And as the need for secure remote connectivity grows, organizations should start to consider alternative options, such as SD-WAN solutions to secure their remote workforces without sacrificing network performance or employee productivity. 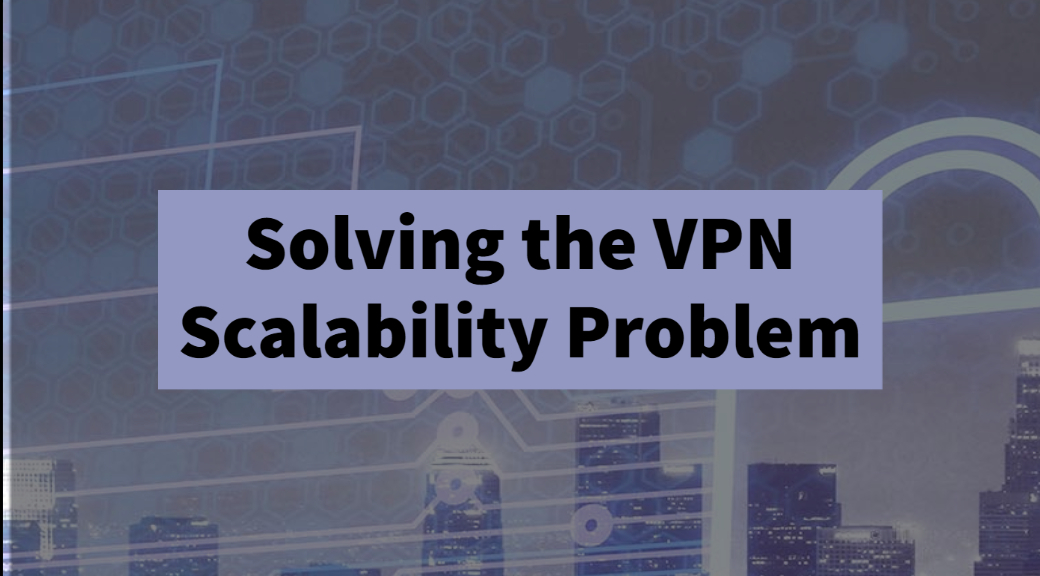 VPNs are an Unscalable Security Solution

VPNs are designed to be a point-to-point connection security solution. A VPN client establishes an encrypted channel with a VPN endpoint on the enterprise network, enabling secure communication between these two points.

For organizations supporting remote work, this requirement for point-to-point connectivity means that teleworkers are connected to a single VPN endpoint on the enterprise network. From there, traffic undergoes security scanning and is then routed to its destination.

The reliance on one or more VPN endpoints within the enterprise network to process all teleworkers’ traffic means that the VPN solution scales very poorly. If demand for VPN resources exceeds the design capacity of these endpoints, network performance and throughput is degraded, and connections may be dropped or denied.

One of the impacts of reliance upon a set of VPN endpoints to manage all inbound VPN connections is that these endpoints have set connection limits. Any network appliance has a maximum number of simultaneous connections that it can support. If this maximum limit is reached, then no additional connection requests can be processed until resources are freed up.

VPN scalability is also limited by its reliance upon computationally intensive operations. The encryption and decryption operations necessary to support a secure tunnel between the VPN client and endpoint consume a great deal of computational resources.

Since these operations must be performed on the VPN endpoint, they can limit the number of connections that it can handle even more than the device’s connection limits. If VPN users perform operations that consume a large amount of bandwidth, such as uploads or downloads of large files, the endpoint must decrypt or encrypt all of this data. As a result, the performance of the VPN and its ability to serve the needs of other users is dramatically decreased.

Beyond the physical limitations of the VPN appliance, VPN manufacturers often impose artificial limits on the number of users that a VPN appliance can support. Many VPN solutions use seat-based licensing models.

Under these models, the organization purchases a set number of VPN “seats” or users that it can support. If the demand for VPN connectivity exceeds the number of purchased seats, additional connections will not be permitted even if the appliance is physically capable of supporting them.

The design of VPNs make them an ill-suited solution for securing remote workers. As support for remote work grows in the wake of COVID-19, the scalability limitations of VPN infrastructure mean that organizations struggle to balance teleworker productivity and security. In order to support a growing remote workforce, organizations should consider more scalable alternatives to VPNs, such as SD-WAN.

Secure access service edge (SASE) is the next step in the evolution of SD-WAN and network security. By moving secure SD-WAN to the cloud, SASE places networking and security functionality close to its users and cloud-based traffic destinations. This enables an organization to maintain full visibility and security scanning for business traffic while decreasing the associated performance impacts and providing a much greater level of scalability than a VPN-based solution.