In the digital world, everyone uses the Smartphone to connect with best buddies and relatives as well as family in all the time. When we look into the Smartphone world, there are a variety of models and versions available with every brand with its unique features. People target to buy the product which is related to their likes, portability and within their budgets as well.

There are many Smartphone manufacturers available worldwide to provide best Smartphone’s for the customers with upgraded facilities. Sony and Motorola are one among the top manufacturers in the world. They have launched different devices with unique features to attract the audience. Sometimes the products from manufacturers have similarity with their competitors too. As like that we have listed some similarities and differences between the Sony and Motorola products here with its features. The both products are named as Sony Xperia Z2 and Moto Z. 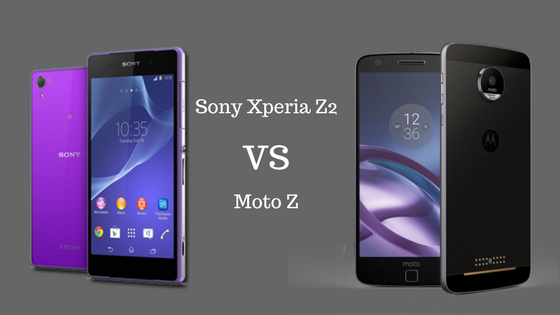 When we start to compare this two Smartphone, both have some similarities and differences too. They were launched in different years, but the functionality looks like same and admirable. Here we listed few matches between these two phones. They are

You May Like : Xiaomi Mi 6 Review – A New Beginning

Both the phones work on with touch screen facility with the net weight of 163gms respectively. The Sony mobile has 3200mAh of battery backup, where Motorola Z has 3500mAh. The only difference which makes Sony upfront with the availability of color option.

There is not much difference between the camera options in these two branded mobile models. They have quite a similar function on its inbuilt camera.

Sony Xperia Z2 front camera is available with 2.2 megapixels and back camera attached with 20.7 megapixels. In Moto Z also you can see the same features with a similar difference like 21 megapixel of back camera and 5 mega pixels of the front camera.

Moto Z is operating with android 6.0.1 version, where as Sony Z2 is running on Android 4.4 versions.

Moto Z has 2.2 GHz quad core processor which is made up of QUALCOMM Snapdragon 820. The RAM size would be 4 GB, 32 GB internal and expandable up to several GB. You can use micro SD card for storage capacity.

Sony and Moto have designed with same connectivity configurations. They both use a single sim, Bluetooth portability, 3G, 4G compatibility and other features as well.

The Motorola Z is available in the market for the price of Rs.24499/-

When comparing these two Smartphone’s, they both have the same quality in most of the scenario. It is your choice to choose the suitable one for your expectations. These are very few and short descriptions we mentioned here. There are many other factors are also available for these gadgets.