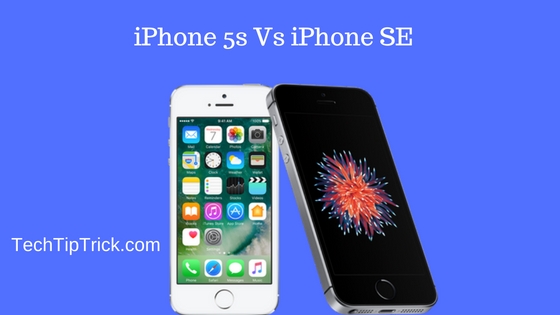 Gadget freaks are all over the market always on the prowl to find a new gadget or device to lay their hands on it and experience the new technology used to create it. Technology is always evolving every minute and this is giving birth to new models of smartphones all the time. The average life span of the smartphone has come down to 1 year with the many new inventions launching all the time. Apple has been a leader in smartphones for quite some time now and iPhones are the need of the hour for every gadget freak. Recently iPhone makers launched iPhone SE in continuation to the iPhone 5S. Let us look at some of the features of iPhone 5s vs iPhone SE to compare it quickly.

Both the phones work on GSM/CDMA/HSPA/EVDO/LTE technology and have no difference. However, the bands are a little different with iPhone SE using the latest GSM and CDMA A1723 version. All are compatible with 2G, 3G, and 4G variants and are a delight to use. iPhone 5S was launched in September 2013 while the iPhone SE was launched in March 2016. There is no difference in the dimensions of both the phones as they have 123.8 X 58.6 X 7.6 mm as their size matters. However, the iPhone SE is just 1 gram heavier as compared to the iPhone 5S.

iPhone 5S vs iPhone SE is a huge battle as almost all the specifications match as compared to the looks and feel of the phone is concerned. However, the Camera is a huge leap as compared to the iPhone 5S. The rear camera is a 12 megapixel sensor in SE while for 5S it is 8 megapixel sensors. But it is disgrace to the technology where the front camera has not been changed at all and still the 1.2 MP f2.4 aperture. This is a setback to the selfie-obsessed generation. However to compensate the iPhone SE has a live photo support which is a consolation to the users.

Battery life is something which all the users are most concerned about, as Apple does not have a good reputation in this genre. But the iPhone Se in comparison to the iPhone 5S has jumped really high and given competition to the plus models of iPhone currently available in the market. So the iPhone SE has 1642 mAh as compared to the iPhone 5S with 1560 mAh.

However, the iPhone SE Vs iPhone 5S is still a big competitive range in the iPhone genre. The iPhone SE comes at an unbelievable rate of $399 for a 16 GB and at $499 for a 64 GB. The worst part about the models is that it is not evolving from the 16 GB mark where the other brands have started to launch smartphones with 32 GB as inbuilt storage. The upgrades of iPhone are so huge that the space is usually over in such cases making it less viable for users. Flexibility is not the key for iPhone makers as the brand name is enough for them to cash in on the current market. However, this is the most affordable one of the iPhone lot and also gives a competition to iPhone 6 and iPhone 6S counterparts.