Sluggish Wi-Fi can be cause by a lot of factors like the area, coverage, signal and such. If you’re suffering under a Wi-Fi with turtle-like speeds, you can try out numerous solutions and one of them would be to replace your router with an even better one. We have a great suggestion for you, rated in top 11 list on CCafe is the Google OnHub. We’ll tell you exactly why you should get this innovative router. 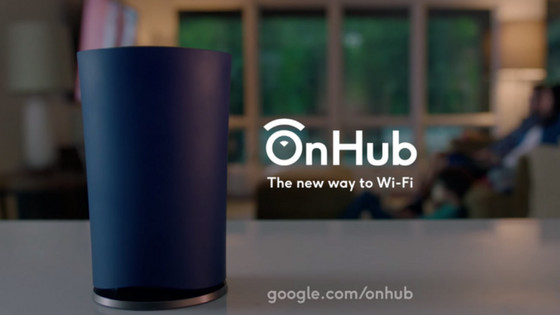 Google has officially enter the Wi-Fi router industry with the Google OnHub; Co-developed by TP-Link. The Google OnHub is a dual-band model and the appearance is nothing like all the other bulky routers out there. Featuring over a dozen antennas, it was specifically designed to incorporate app control with specific network function. Other features include a Bluetooth 4.0 radio and a wired LAN connection. Of course there are a number of downsides like the overly basic parental controls and VPN services.

Google deliberately designed their router to be out in the open and why not? Unlike other routers that are big and bulky and looks similar to a bug with all the antennas, the Google OnHub has a sleek design; a cylindrical-shaped router casing without any external antennas. The Google OnHub stands at 7.5 inches tall and is 4.6 inches in diameter. The top part is a speaker which gives of techno sounds as you set it up and the light ring displays a subtle glow in order to let you know the status of the router. If it’s blue then the router is all set and ready of the set up. Teal on the other hand indicates that the router is already active and running. Meanwhile the amber color signifies that something went wrong during the setup and that you need to check out Google on App for troubleshoots.

The manufacturers state that the OnHub is able to provide up to 600Mbps on the 2.4GHz band and 1,300MBps on the 5GHz band. Inside, there is a dual-core processor, 1 GB of DDR3 memory as well as 4GB of eMMC flash storage for updates. Also inside the router are 2.4GHz antennas as well as six 5GHz antennas all strategically placed in a circular pattern for optimal coverage. A reflector antenna enhances the strength of the signal. A congestion-sensing radio constantly polls the overall wireless activity and transfers the devices to varying channels for a better performance.

Majority of routers out there are managed using a Web-based interface, but the OnHub I managed through the use of Google On app; this app is free and is available for Android and iOS. The corresponding app is user-friendly and features numerous tips and explanations concerning different settings. On the main page, you’ll be able to see the overview alongside a diagram displaying all the connected devices. You’ll be immediately alerted in case any issues come up, of course you’ll also be offered solutions as well as explanations. The small green icon displayed on the bottom of the page launches network check utility; this measures the internet download and upload throughput alongside Wi-Fi efficiency. Wi-Fi access tab shows the name of the router and the password, you’re given an option to send this information to friends and family with the help of text messages, email and Facebook. There is only a handful of network setting; you’re able to customize your IP address or make use of the automatic setting. Users can also choose to either enable or disable the PPoE WAN settings, DHCP or Static IP.