Web application risks are common for most types of programming frameworks and languages, including Node.js. The difference consists in the fact that Node.js itself is completely secure, however, additional packages used in the development process do need some extra measures to be taken in order to protect the project. Node js web development company ought to take that into account and prevent the ecosystem from being exposed to any risks.

Recommended: What are the Advantages of React JS 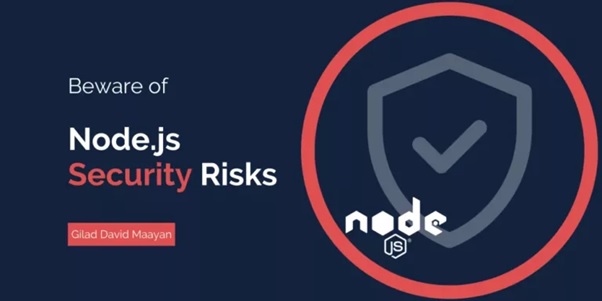 What are the reasons to bother about Node.js security?

When developing an open-source application, all companies should remember that there are a number of open-source components, which may cause different issues with security and/or license. Why does it happen? The issue is that no kind of code analysis, is it dynamic or static, can detect those open-source components that are prone to risks.

There are a number of reasons why open-source projects are used over and over again. Speaking of which, it for sure boosts the process of development, marketing takes less time to conduct and improves the functionality. So, it leads to the point that files are incorporated with both commercial and open-source functions, code snippets and methods. That is why some Node.js projects have different licensing terms: original and other than the latter.

Is there any danger of Node.js for the application?

There are programmers who think that Node.js puts the functioning of the project at risk because it does not have enough default measures to handle errors. In case the errors are not fixed, a server may crash as a result.

Node.js may expose the application to the risk of NPM fishing and DoS that is Denial of Service. However, there are not only threats related to Node.js but also common web security threats. In this matter, they are security misconfiguration, cross-site scripting and request forgery, and unvalidated redirects.

So, what to be concerned about in terms of Node.js security?

As mentioned before, there are some open-source components (js-dom, seek-bzip, adm-bzip, react-native, tough-cookie) that may cause security issues with Node.js. The risks can be caused not by the open-source components themselves but by the hidden license elements (MIT) and lead to potential conflicts. The project or the company may appear at risk if it fails to correspond to those elements. As a result, it may lead to some legal consequences.

One more thing to consider is the use of old versions of Express. This framework is probably the most commonly used in the development of web applications on Node.js platform. Nevertheless, the creators of this platform did not put security on the first place. So, in order to protect web applications only modern and maintained versions of Express framework have to be used.

Applications developed on the basis of Node.js and Express, though, may be secured with the help of Helmet, which is a set of middleware functions. These functions enhance the security of HTTP headers to prevent different attacks (man-in-the-middle and cross-site scripting attacks) and to make server connections safer.

Another point to take into account is cross-site scripting (XSS). XSS lets hackers infect web pages with hostile client-side scripts. Such an issue can lead to a leak of data and harm to the application. Anyway, there are some ways to secure Node.j projects from such attacks using Jade engine, as a tool with built-in encoding frameworks, or output encoding techniques.

Cross-site forgery requests (CSFR) are worth highlighting when it comes to unwanted behaviors. As a result of CSRF attacks, end users are compelled to do unnecessary actions on secure online apps. CSRF attacks seek to change application state requests since the attacker has no way of identifying the false request-response.

Hackers can use social engineering techniques to trick individuals into completing unnecessary chores, such as sending links through chat or email. CSRF has the capacity to force state changes, such as email address changes and subsequent money transfers. For administrator users, CSRF may put the entire web application at danger.

In order to secure Node.js project,s Anti-Forgery Tokens have to be applied. These tokens can examine and identify the authenticity of any requests by users. Thus, they can prevent CSFR attacks.

Another thing to take into consideration is a default cookie session name. Session cookies allow websites to identify users. A cookie is created for each action you perform on the website. Shopping carts on e-commerce websites are the most typical instance of this functionality.

The e-commerce site’s session cookie maintains track of the goods you’ve selected. As a result, these items will be in your shopping cart when you’re ready to check out. The new website will not recognize your prior activity on other sites if session cookies are disabled.

Attackers may easily detect default cookie names and use them to damage your application if you utilize them. To address the problem, use one of the middleware modules of a cookie session, such as express-session.

X-Powered-By is a common non-standard HTTP response header. In certain scripting systems, this response is automatically put in the header. Servers may put out of action or alter the X-Powered-By response to prevent hackers from aiming at a specific technology.

X-Powered-By provides details on an app’s technology. As a result, Node.js security vulnerabilities may be exploited via X-Powered-By. You can hide information about the server technology by disabling this header.

A profound dive into the source code of a third-party package is required to create a Node.js application. You have to discover more about the open source package requirements in your apps, as well as the licenses’ hidden components. To solve Node.js security problems, certain tools and audits may be employed. Ultimately, you could employ a Node.js consulting business to assist you with the procedure of ensuring Node.js application security.